Iron has been made in the area since the iron age. There are plenty of ore; foremost in all lakes and bogs. Lake ore is extracted from lake bottoms. During the winter, go out on the ice with kastrakor or
scrapers and make holes in the ice and simply scrape the lake's bottom. The ore is then hoisted up with a screening.

As an energy source, the water is indispensable. Between Hult, Edshult and Ingatorps occupies Brusa stream an approximately thirty metre drop. The kinetic energy as water develops as it travels from a higher point to a lower is ideal to be used by water wheels. When electricity makes its appearance as an energy source 1886 the old water wheels  is replaced with turbines.

The forests of Småland is utilized for the production of charcoal, which is used to melt the ore. It takes a lot of forest for an iron works to keep the operation afloat. The farmers in the area are to set up the charcoal kiln and provide the use with coal. In the early sources the foundry proprietor complains over farmers reluctance to complete the task.

For the construction of a charcoal kiln large quantities of wood was brought on its upend. The whole thing is covered with pine boughs, moss, dirt and slack coal. Then lights up the milan and only a small amount of air is released in but enough air for the fire to just smoulder. It takes great skill to keep a charcoal kiln started. Milan may not go out, nor may it burn up. A charcoal kiln burns in about 14 days before the coal is clear. 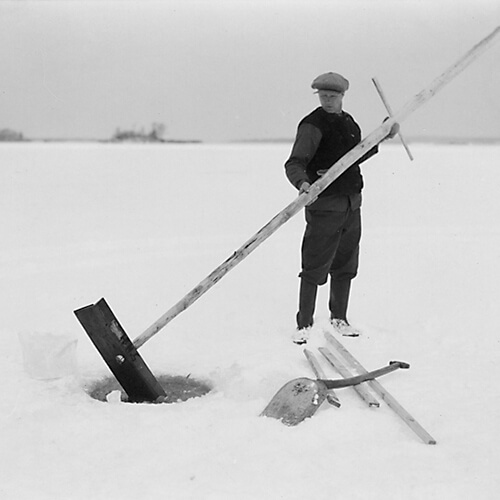 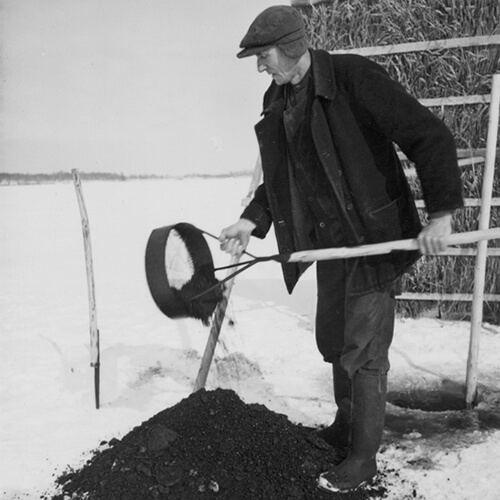 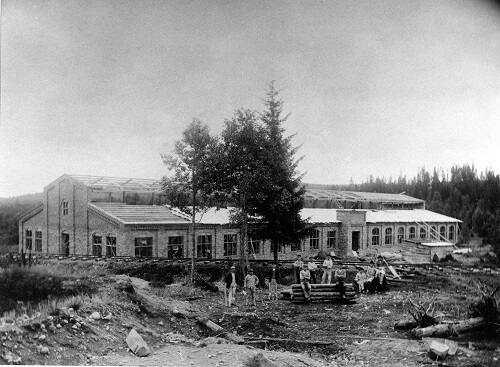 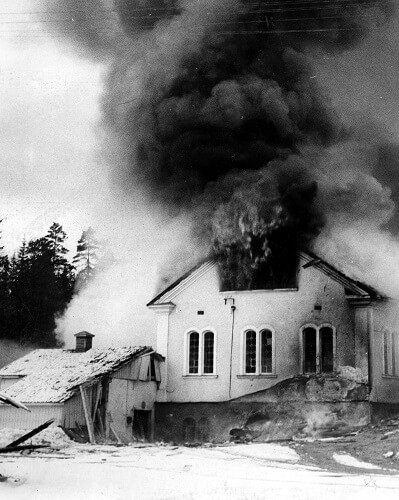 When Bruzaholms MIll began their eventful history 1660 Sweden is a great power nation and the need for iron is big. Rifles shall be manufactured and cannons should be cast. During the Danish war (1658-60) a Swedish heir is marching in Norway and besiege the Fredrikshalds fortress. This year, Karl X and the great power is taken by a Regency. His son, the future King Karl XI, then only four years old.

As it says in the letter that Nils Padhersson, from Mountain College in 1660. This means that he is given permission to build a ränneverk to produce iron, and that during the first six years to benefit from tax exemption. He names the Small ironworks to Brusa.

The blast furnace and the flood

Nils Pädherssons time as a foundry proprietor will be short-lived. After two years he is selling the little mill to Werner Teschemacher. The new owner tear the already now hopelessly outdated ränneverket down and builds a modern blast furnace. He also builds an iron forge hammer and a pincer-hammer. After a few good years 1688 occurs the first accident of several in the  mill's history. A heavy raining makes damms  burst and the use of the mill is destroyed. For more than 30 years the mill stays empty and untouched.

After war, famine and pestilence the slumbering mill is awoken from it's sleep by Zacharias Kiellman the year 1722. Meanwhile the damm was moved from Täcka Udde to its current location. (He rebuilds the mill and 1729 he gets a privilege for a papermill. The papermill produces white printing paper and grey rag. The bussines seize to exist in 1855.)

This unfortunate man suffers many misadventures. The mill, now known as Bruzaholm, endured fires, floods and errant farmers who didn't  want to provide with charcoal. When he sells are dilapidated well advanced and the new owners may start to fix up Bruzaholms use.

During the second half of the 1700 's it is good times for Bruzaholms mill. The new owners, Isaac M P and Claes Hindric Stedt and site manager Johan Rydbeck, the mill has for the first time, a management team with experience in iron management. From having been a century-old failure the mill now goes with a profit. This golden age is composed up to 1700-century. The so important nail forging introduces 1797 of foundry proprietor Johan F.

At the turn of the century around 1800 falls worse times. Puddling means that Englands need for Swedish bar iron decreases. Another reason is the Napoleonic wars. With the French State's aggressive foreign policy closes European ports of English ships, which means that exports of iron to the British Isles in sort off ceases.

After a few decades of mismanagement  C M A Sjögreen takes control the year 1827. Despite his young age of 27 years, he has extensive experience in the iron industry. He immediately started to refurbish the derelict mill and a new era in the history of Bruzaholms Mill begins – Foundry.

On 28 april 1830 Sjögreen obtains  permission to erect a stjälpugn that enables foundry business. From the outset, foundry products from Bruzaholms Mill gets a good reputation that they are of a high quality. But the good times will soon receive an abrupt end. In the summer of 1831 occurs, one of the biggest natural disasters in Jönköping County history. After persistent rain the damms burst and the entire mill is destroyed.

The extensive damage makes Sjögreen think of closing down the business. After a period of consideration, however, they started to build it up. 1834 is Bruzaholms Mill is again ready for operation.

1840 century becomes something of a heyday for Bruzaholms Mill. Now the old German forging gets abandoned in favor of the more efficient Franche-comtésmidet. Pig iron is produced for export and at the foundry a variety of machine parts for crushers, hammers and sawmills are produced. 1853 Sjögreen assigns  the  mill to his son C W Sjögreen, who together with Theodor Isac Suber is pushing the practice further. 1857  Sjögreen leaves the mill while Suber is pushing it further. The following year he built the first independent foundry with the cupola oven. At the old brukskvarnen for mechanical workshop.

The decline of forging

During the 1860 's  big chances are  taken. When the introduction of Lancashire the forging and the rolling mills breaks through the large-scale industrialization is just around the corner. The old ironworks is replaced by large ironworks. 1866 Suber is in economic trouble and forced to borrow the huge sum of 50.000 kr of his former companion Sjögreen. Time, however, has sprung from Bruzaholms Mill. In 1871, the last blast furnace blowing happen and soon after the mill was sold to a english dominated company, which immediately puts down the blast furnace and iron forge.

The burgeoning optimism,  gets a quick end again. Lake ore, which has given life to the mill for over 200 years, making wood pulp is disabled when the iron content in the water is too high. In the summer of 1874 bankruptcy  is inevitable. Ironically  the railway  between Nässjö-Oskarshamn completed just one month later. The company management had expected to benefit much from the new railway line that is now drawn next to the factory site.

In Bruzaholm the foundry proprietor has not yet played out their role. After a period of confusion the former manager of the mill Frederick Augustus Ljungbeck takes control 1877 as a foundry proprietor. Despite weak economic conditions for the iron industry during the 1870 's and 80 's, production is relatively smooth. 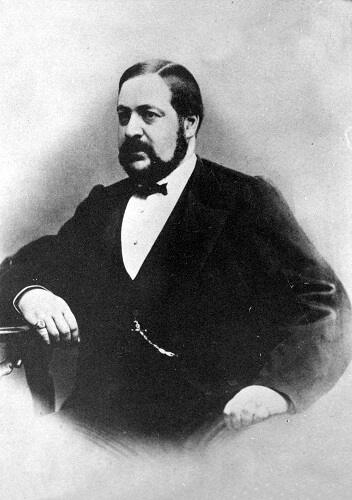 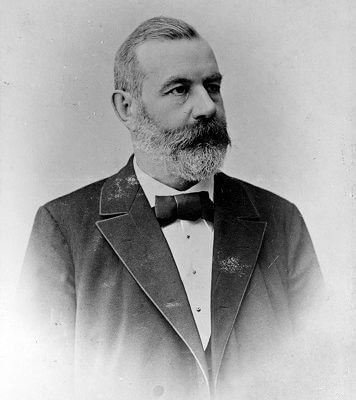 1888 Ljungbeck sells the mill and the new owner cut up the estate and sell on. Most of the woods are purchased by Domain work. The mill bought by Johan Olof Lundberg, the last ironmaster. He came to Bruzaholms Mill already 1883, when the tenant. Lundberg is a technician of modern type and with a good spirit of invention. He also has a great practical and theoretical experience in the iron industry.

In Lundberg's management Bruzaholms Mill begin with pump manufacturing. 175 different models of pumps produced, among them the famous "Aries". Lundberg receives several patents. One of his most famous, he takes 1896 then the o-ring, which is a type of rubber gasket, be patented.

All the Foundry's capacity required to satisfy the market and 1898 are added all other foundry operations down. 1892 form J O Lundberg along with their sons, Arvid and Joseph Lundberg, Bruzaholms Bruk AB. Hence are mill print time. At this time the use Scandinavia's largest manufacturer of pumps.

The ups and downs

When old men "Pump-Olle Lundberg dies 1900 his sons takes over the operation. They have inherited their father's technical character. They develop production, expanding the workshops and dwellings. A new foundry built to the East of the old 1907. In the first world track must still use the brothers to sell Scania-Vabis 1917. After only four years forced Scania-Vabis into bankruptcy.

From radiators to tools

After a dismal 1920 's with different owners will once again an enterprising person and save the historic Mill. 1931 the factory owner buys C A Alm from Målilla Bruzaholms use and production shoots back up. His sons Gustav and Holger Alm is responsible for the practice until 1988. During the 1930 's begins manufacture of central heating radiators, boilers and cookers. The economy is stable and the war years 1939-45 is causing no major problems. During the 1950 's starts Holger wear and Alm manufacture of heat-resistant steel castings and 1960 will export started.

1965 destroyed parts of radiator workshop in a fire. As a consequence will be added radiator manufacturing down 1969. During the 1970 's, a decline in production. The oil crisis of 1973-74 makes production costs rise significantly when the mill using oil-fired furnaces. Now install electric furnaces instead. Even many old retainers retires. Use rely on labour migration and production recovering somewhat.

After 57 years, sells family Alm Bruzaholms Use to the real estate company Cover AB in 1988. From 1991 owned the use of the privately owned industrial group Cellwoodgruppen. Year 2006 decisions to invest 50 million during a three-year period to meet the increased demand for durable and heat-resistant steel castings. At the same time to get permission to increase production from 2 000 to 4 900 tonnes per year. 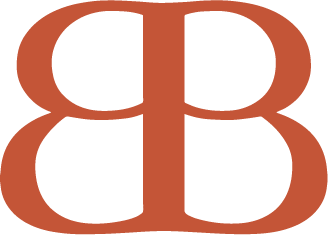 The museum is open from the first Tuesday
after Midsummer until mid August.
Tuesday-Sunday at 13.00-17.00 Other times and bookings
by groups by agreement on
tel. 0381-202 03